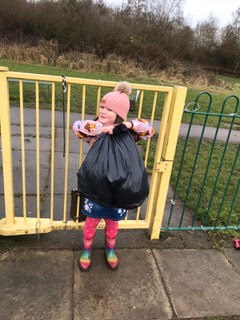 When Abbie, aged 5, saw her Mum and Dad, Emma and John Ghent of the Property Fox, make a donation to local charity Alex’s Wish she wanted to get involved too!

Abbie decided that she wanted to do something to raise money for a children’s charity and chose Alex’s Wish to be her charity.  As for how she’s raising money, Abbie decided to do a sponsored litter pick around her local community and is aiming to collect 10 bags of rubbish and raise £100.  However, Abbie’s total raised to date is sitting at £625 as people see her story on Facebook and support both her litter picking and her chosen charity.

Emma Hallam, Founder of Alex’s Wish said, “When Abbie decided that she would like to raise some money for a charity by litter picking we were very fortunate indeed that she chose Alex’s Wish.  Abbie wanted to raise £100 by picking 10 bin bags full of rubbish but has already smashed that target and is continuing to raise money for us.

“Thank you Abbie for not only cleaning up your local community but for fundraising for us.  You are an absolute superstar!”

Speaking about her litter picking exploits Abbie said, “I wanted to help Alex’s Wish and I am so happy with the money that I have raised.”

You can still support Abbie by donating here: https://uk.virginmoneygiving.com/EmmaGhent