Be Bold Beautiful & Confident with Chrissie!

Chrissie Gregory is the woman behind FaceByChrissie, a Make-up Artist/Transformational Coach/Inspirational Speaker. Chrissie’s passion is to build confidence within women through her creative work, so women can express themselves and feel confident & empowered to be, or do whatever they desire in life.

Chrissie Gregory has made a name for herself within the beauty industry, having worked for premium cosmetic houses and owned her own beauty salon. Keeping up with trends and continually reinventing herself, through the art of make-up Artistry has enabled Chrissie to really make a real difference and utilize her skills to educate and empower women in the art of looking great.

Chrissie quotes “What makes it so satisfying is when a woman goes from lacking in confidence, to then taking the stage at the beauty pageant shows that she works closely with as a confidence coach/MUA gives her a total sense of satisfaction”.

When women are in the early stages of their career and lack the confidence to promote themselves Chrissie who is a Jack Canfield Success Principles Coach gives clarity and guidance to ensure these young women make an impact and have a successful career representing their countries and communities.

Chrissie embodies her role as a confidence coach through her own life experiences and truly believes integrity, authenticity and respect are traits that a woman should embrace.

Inspiring women is her mission in life, therefore public speaking and empowering women through her work as a Jack Canfield Success Coach to embrace the changes necessary in life to become more confident & successful in every area from personal growth to business success is key.

As a board member of the Employment Skills Academy for hair/beauty students at Derby College, Chrissie regularly presents workshops on the success principles to students and has held Health & Wellbeing Expo’s at the Roundhouse allowing students to participate at these events which Chrissie was accredited an award in 2017 for contribution. Working as a confidence coach/MUA with The British Empire Pageantry, allows Chrissie to prepare young women for the selection process i.e. interview skills and how to represent their countries and communities once presented with their title at the pageant competitions.

Make-up is superficial, but it seems to touch something deeper within. Chrissie personally, believes make-up is an amazing creation that makes women feel a billion times better about themselves, which is powerful. If it wasn’t for make-up, Chrissie wouldn’t be able to express who she is and that’s empowering.

The successful launch of FacebyChrissie has prompted Chrissie to naturally progress her movement by launching VIBWomen in June 2018 and brings women from the Derbyshire district together every month to connect, engage and empower each other. The event is very much about the entrepreneurial woman that attend, giving them the opportunity to network and empower each other. Women can feel very isolated within business and this network club is one of many that Chrissie plans to launch in the coming 12 months.

Chrissie has always been passionate about supporting women and is a successful Multi-Level Marketing professional having built a team of successful female entrepreneurs who have gained considerable success in their own right with the coaching and support of Chrissie.

Chrissie has really promoted herself and recently spoke at the Women’s Economic Forum in Birmingham and through this connected with women from around the world globally. Infact VIBWomen is still in its infancy stage but Zoe Bennett, Director of Motivational Queen TM is working in collaboration with Chrissie Gregory and the VIBWomen’s Club is a Regional Mastermind event marketed under the Motivational Queen’s Trademark. 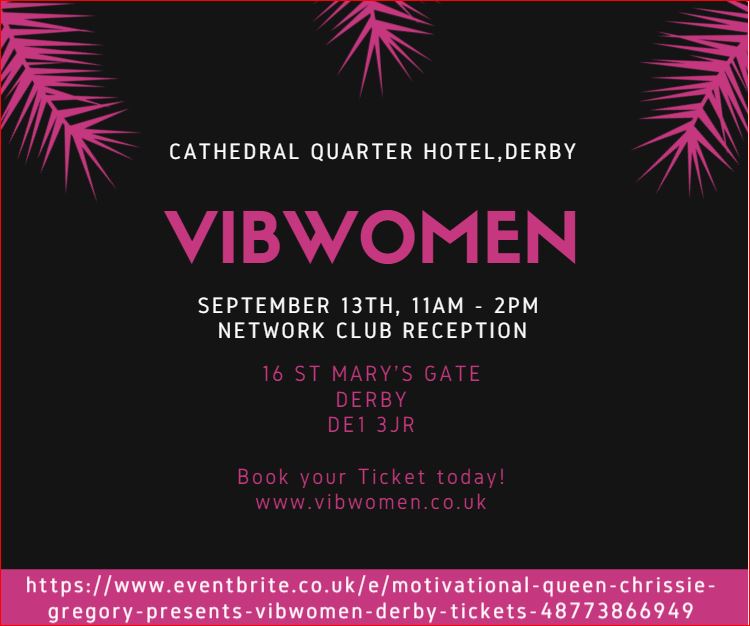 The future for VIBWomen is looking very promising with more projects in the pipeline for later in 2018/2019.

or Email: ​[email protected]​ and book through https://www.vibwomen.co.uk