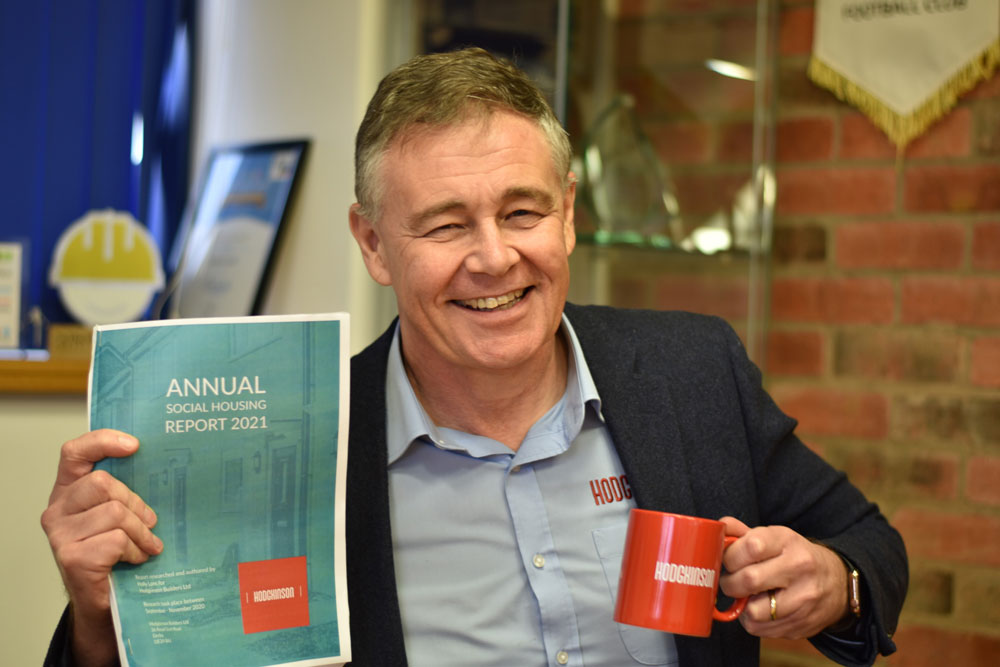 Social Housing Could Help Build Our Way Out of The pandemic’, Claims Construction Boss in First White Paper

A Derby construction boss has released a report which describes how the UK could build its way out of a looming post-Covid recession and save billions of pounds for the taxpayer.

Hodgkinson Builders, has produced its first Annual Social Housing Report in conjunction with support and research from the University of Derby.

The 96-page white paper paints a warts-and-all picture of the current state of the construction industry, including the deep-seated problems caused by skills shortages and poor construction methods.

But its main focus is to highlight the crisis surrounding a lack of social housing and the need for people and organisations to change negative attitudes towards the concept of social housing.

Significantly, Ian Hodgkinson, managing director of Hodgkinson Builders, is urging businesses and governments to use smarter, more sustainable methods to build much-needed social housing quickly – and in doing so will reap rewards for society as a whole.

The report explains why every affordable home built in the UK generates an additional £108,000 for the economy, due to the creation of jobs, and boost to the local businesses in that area. The report also details why improving the housing stock for the less well-off will cut billions in unnecessary expenditure from the NHS bill.

Launching the white paper this week, Ian said: “Never has there been a better time to improve housing and social housing in the UK. Faced with the economic challenges caused by the current pandemic, this is an area that could drive our economy in the right direction and give us a chance to build our way out of a crisis.

“Although this report was conceived and written during the pandemic, it’s something that I’ve been meaning to do for a long time. But now, the conclusions it draws are even more poignant than they were beforehand.”

Ian said that with so many people struggling financially, and with the benefit system funding increasingly expensive temporary housing solutions for homeless families, it was imperative that efforts were made to remove the stigma of social housing.

“Investment in social and affordable housing has profound benefits for the economy, for people’s health and well-being and for the adhesion of local communities,” he said.

“I hope this white paper helps to sort out the facts from the myths in such a way that we can finally achieve the goal of providing every person with a solid roof over their head.”

The non-political white paper is being distributed to Government ministers, housing associations, local authorities and other decision makers in the hope that it will help to shape future housing policy.

The report can also be downloaded from Hodgkinson Builders’ website, and people are encouraged to provide their honest feedback on the company’s social media channels.

Recommendations made in the report include:

–       Adopting better methods to facilitate the use of brownfield land for housing.

–       Reforming the planning system to provide more powers for local authorities to address the specific circumstances of their own areas.

–       Freeing up the thousands of empty homes for much-needed housing use.

It is not the first time that Ian has been at the forefront of important debates surrounding construction. In 2016, he led a team of apprentice bricklayers to London, where they built a wall in front of Big Ben to help highlight the skills shortages in the industry.

Success for Derby training firm as pioneering programme for women in the utilities...