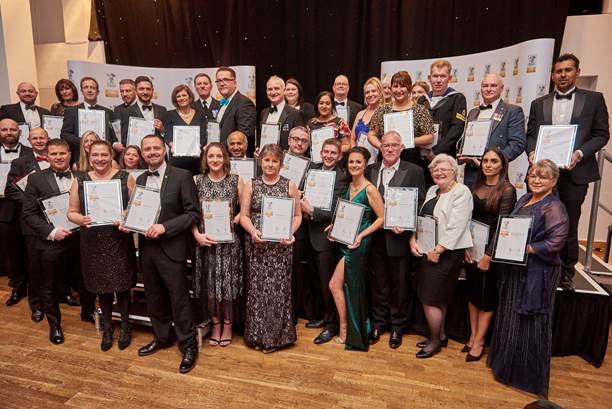 Golden night for 38 of the most forces-friendly employers

Local authorities, educational establishments and commercial companies spanning IT, recruitment and building materials were among the organisations honoured for their outstanding support for the military last Thursday 25th November at a regional ceremony to recognise the 2021 winners of the national Defence Employer Recognition Scheme Gold Awards.

Against the stunning backdrop of the Royal Armouries in Leeds, 38 organisations in total were recognised for the contribution they make to the Armed Forces community in an event jointly hosted by East Midlands RFCA, North West RFCA and the RFCA for Yorkshire and the Humber.

Winners ranged from small and medium-sized family companies to large organisations employing many thousands of people, such as the University of Derby and Aggregate Industries. What all of them had in common was brilliant HR practices that support staff that serve or have served in the military.

(CAPTION:  Gold ERS 21 Award winners for the East Midlands, North West and Yorkshire & Humber. Photos of all the winners detailed in this press release can be found at https://cloud.rfca.org.uk/index.php/s/fSWdQMnrC2w4eq6 )

Minister for Defence People and Veterans, Leo Docherty, was guest speaker for the night and he said: “I would like to thank all the organisations who have proven their support for the defence community during such unprecedented and challenging times.

“The vast range of those recognised this year demonstrates how employing the Armed Forces community makes a truly positive and beneficial impact for all employers, regardless of size, sector or location.”

To win an award, all the organisations provide ten extra paid days leave for serving Reserves and Cadet Force Adult Volunteers so they can attend camps and training events. They must also have supportive policies in place for Veterans, Reserves and Cadet Force Adult Volunteers, as well as the spouses and partners of those serving in the Armed Forces.

The awards were presented by Her Majesty’s Lord-Lieutenant of West Yorkshire Ed Anderson, who said: “The military depends on great employers who truly understand the role of Reserves to the Armed Forces’ capability, as well as the vital part Cadet Force Adult Volunteers play in creating fantastic and often life-changing opportunities for thousands of young people in local communities. That’s why it is such an honour to present awards to these organisations who showcase the very best of employment practices when it comes to those who serve, and those who have served, and their families.”

The organisations in the East Midlands who won the prestigious award are:

“We salute the winners of the prestigious Gold Award – these exceptional organisations in the East Midlands are a great credit to the local business community and to the wider Armed Forces community. Any organisation can show their support no matter how small, so we hope this encourages more and more to sign up the Armed Forces Covenant and become the Gold winners of tomorrow.”
Philip Brooks-Stephenson, KL – KuKu Connect Co-Founder

In addition, Nottinghamshire Healthcare NHS Foundation Trust had their Gold Award re-validated after holding it for 5 years already.

Carol Cooper-Smith, CEO of Ashfield District Council, Nottinghamshire, commented: “Ashfield District Council prides itself on its support for our Armed Forces and we promote positive engagement with service personnel both inside and outside of the Council. We are therefore delighted to have been awarded a prestigious Gold Award by the MOD for our work and we will continue to strive to be an exemplar.”

Tim Stevens, Managing Director of SME Mercury EW and Defence Training Services, Lincolnshire, said: “We value the work of all members of the Armed Forces and recognise their commitment and the sacrifices that their families also make.  As a small business, we are immensely proud that we recognise former serving members, members of the Reserves and spouses, as our employees. It is their skills, experience and continued professionalism that makes our business a success.”

Professor Kathryn Mitchell DL, Vice-Chancellor of the University of Derby, commented: “I am delighted that the University of Derby has been awarded the Ministry of Defence’s highest badge of honour in recognition of our commitment to the Armed Forces community.  At Derby, we are keen to attract service leavers as employees, and to encourage them to start new careers, education and training with us, recognising the outstanding transferable skills that Veterans bring that can be built on in a second career.”

Nottingham street getting ‘axed’ – but in a good way!