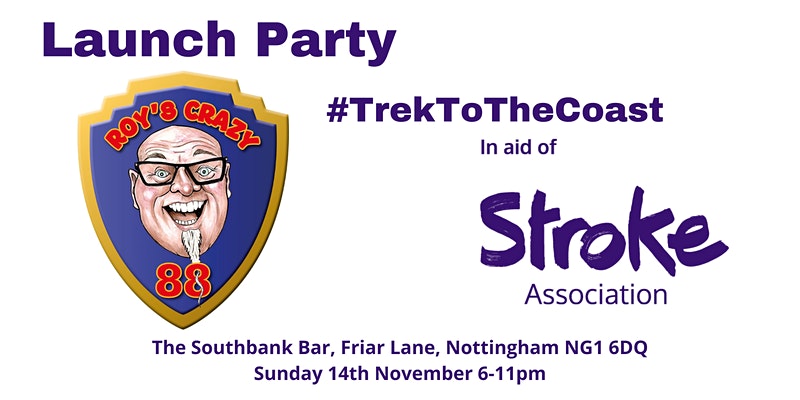 Roy’s Crazy 88 is the brainchild of Roy Bond, a Magician from Nottingham, who along with the team aims to raise £8,888.88 for the Stroke Association by walking with fellow team members from Nottingham to Mablethorpe in April 2022.

Roy was born in Nottingham, grew up during his early years on the East Coast returning to

Nottingham as a teenager, but kept his links with the East Coast. It’s a journey he’s travelled many times, and actually the second time he will be walking it although after the first time he was quite vocal saying never, ever again!

The reason for choosing to support the Stroke Association is down to Roy’s life changing forever when he was just 6 years old. His mother had a stroke which left her with epilepsy, memory loss and paralysis. Returning to Nottingham at the age of 12 Roy and his mum moved in to supervised accommodation where he learned to care for mum and she learnt to live independently.

Roy says “I wish I had had the support as a child that is available now and I hope by undertaking this challenge it will help raise awareness for carers and maybe help someone cope with the aftermath of such a life changing medical condition.”

Roy’s Crazy 88 will be walking 88 miles from Nottingham City Centre to Mablethorpe between 13th April 13th and 15th April 2022 ending their challenge with a welcome reception at The Dunes Complex.

Roy will be supported with this fundraising venture by his partner, Deborah Labbate, who will act as Project Manager taking care of logistics, fundraising and marketing the supporting events before joining the last 8 miles of the walk. Deborah lost her own mum on New Year’s Eve 2020 following a number of strokes.

Walkers are Steve Reeve, an ex-Submariner and a life-long friend of Roy’s. Scott Adams, Director of the Top Spot Club in Carlton, who will also be hosting one of the fundraising events for the team, and finally Debbie Prince, based on the East Coast and an old friend of Roy’s. Debbie is well known for

her various charity fundraising efforts having completed numerous marathons etc. as well as being known as Mablethorpe’s Mrs Motivator! The walkers will be followed by a safety vehicle driven by Stuart Parris, a Security Officer.

Others inthe team include Sharon MacInnes, Head of Faulty at Bilborough College who will be on hand to help with logistics, Ian Stoddart of Ian Stoddart Design will be providing graphic design services and marketing materials and Cathy Stoddart supporting with events and fundraising.

Keep up to date with our fundraising progress: https://www.justgiving.com/fundraising/royscrazy88trektothecoast

N.B. Nottingham start will be from the city centre (venue TBC) with the team departing at 07:15.

Finish in Mablethorpe – a welcome reception will be hosted by Paddy and Debbie Prince at The Dunes Complex, Central Promenade, Mablethorpe LN12 1RG www.dunescomplex.co.uk

Two other events have been organised to support Roy’s Crazy 88 fundraising.

The first will take place on Sunday, 14th November 2021 as the team’s launch event.

With entertainment provided by The Fab 4, one of the world’s premier Beatle bands with an enviable talent for recreating that classis Beatle sound. Also, Mick Heffernan aka DJ Trent Soul, a top Northern Soul DJ who has played all over Europe and in America. Last, but by no means least, is Ben Hickling, aka Just Ben. Ben’s been in the business for around 15 years and well known across the East Midlands for his passion for playing live and giving people a night to remember.

The second event will take place at the Top Spot Club, Carlton, on Friday 4th February – full details will be available soon.

Wilkins Group re-lights the way for M&S to get in Christmas spirit
Scroll to top
This site uses cookies: Find out more.